Binge-worthy TV Shows for the Weekend

More often then we’d like to admit, the weekend comes around and our good intentions of being productive humans turns into dust and we find ourselves flicking through Netflix, ready to enter a world devoid of responsibility. The problem? Choosing shows we’re going to feast our eyes upon next. Sometimes it feels as if we could finish an entire episode by the time we settle on what series we want to watch. So, to help my fellow binge-watchers out there, here’s a couple of ideas that will help you prepare for your next marathon – the kind where the only physical activity you’re doing is grabbing snacks.

Dark, thought-provoking and at times depressing, the creators of Black Mirror  really knows how to spin our favourite bits of technology into a dystopian nightmare. Each episode is its own stand-alone story so at least you can stop half-way through a season without the question of “what happens next?” haunting you while you’re trying to fall asleep – although you may have some other thoughts keeping you awake after a few episodes. 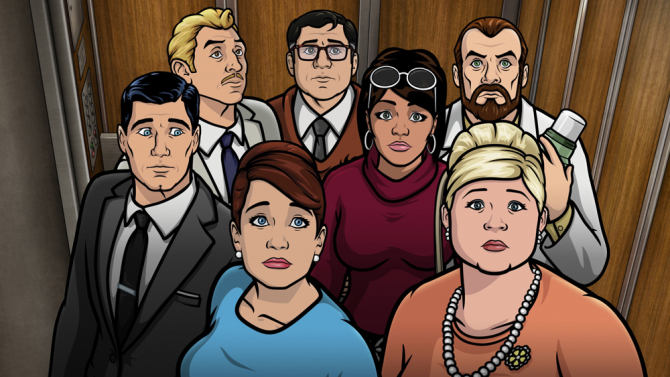 If you’re looking for some crude humour and quirky characters, then Archer may just be up your alley. Parodying James Bond and other spy movie stereotypes, Archer has everything from cyborgs to drug cartels, country singers to ferocious ocelots. The basic plot revolves around playboy spy Sterling Archer and his dealings with worldwide espionage along with his fellow eccentric agents. Live your life in the danger zone and get ready for eight seasons of quotable goodness.

A Korean drama exploring the lives of five very different roommates, you’ll laugh and cry as these girls unearth unwanted memories from the past while trying to deal with their already complicated daily lives. If you’re not a fan of subtitles then this may be frustrating to watch (unless you speak Korean), but the overall feel-good tone of the series makes it a great watch for a ladies night. The second season just started to air back in August so there’s no better time to see what this show is all about.

Following the life of Dev, a 30 year old actor, Master of None traverses the modern-day experiences of romance and culture while exploring New York’s best food spots on the side. Loosely based on Aziz Ansari’s (who plays Dev) life, you’ll find the stories in each episode relatable as they all show incidents that most of us will have to deal with as we grow older. Sometimes funny, at times bittersweet, Master of None is the slice of life series worth watching.

Anime may not be up everyone’s alley, but this is one show that kept me on the edge of my seat every single episode. Basically, whenever two people die, they are sent to a mysterious bar to play a game which ultimately determines whether they’ll be reincarnated into another life or pass on into the void. Sounds strange, but that doesn’t even scratch the surface of the intensity of this series as the characters do everything in their power to win the game. Death Parade is available to watch for free on Crunchy Roll although it is locked out of some regions so you might have to dig a bit on the interwebs to find the entire series.